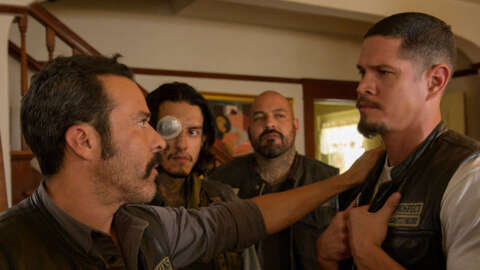 Mayans MC showrunner Elgin James has revealed that he knows how the Sons of Anarchy spinoff will end. James shared some preliminary details on not so much the ending itself, but that there’s a destination point in mind for the series, with Variety.

“We know where it ends,” James said. “I know the very last shot. So, it’s not in Season 4 so I’m just going to say, there at least has to be one more [season]… we have been headed there for a while now.”

James also added that during Season 3, he has let the actors know where the show will end up–and knew himself for quite some time before then. “I wasn’t able to verbalize it or I was too scared to verbalize it until last season,” he said. “[The actors] know where this ends and the studio and the network are starting to get a sense of where it ends but we’ll see if it’s Season 5 or Season 15.”

Season 4 of Mayans MC premiered on FX on April 19 with the first two episodes, “Cleansing of the Temple” and “Hymn Among Ruins.” Episodes 1 and 2 are now available to stream on Hulu. As star Clayton Cardenas, who portrays Angel Reyes, says of the show’s eventual conclusion that the cast is “all very happy with where it’s ending” and called whatever finale that’s ahead an “artistic, satisfying end.”