Billed as a union between Soulslikes and Tetris, Loot River delivers this intriguing combination with style. Every moment swings between slick puzzle-solving and smooth action. Players should expect to continually die in Loot River’s darkly atmospheric levels, with each death setting you back to square one. However, the thrilling gameplay and rippling pixel art make it hard to resist one more run.

I begin on a raft; a pitiful mattress and discarded junk are scattered around me. I know I am in the Sunken Village, a miserable-looking place with rotting wood decks floating atop murky waters, but not much else. The tone and cryptic story scream Dark Souls, especially when I find a note: “This is no kingdom; it’s a tomb.”

Getting from place to place, no matter the level, requires me to shift around multi-shaped platforms with the right joystick while controlling my character with the left. Navigating through narrow corridors and platform-choked arenas makes me constantly swap from one shape to the next just to find my way through. I was worried this might be unwieldy, but after a few moments of getting adjusted to the controls, it feels instinctual and provides a sense of accomplishment outside of combat. The flowing pixelated waves following in my wake also give the world a wonderfully dynamic feel. 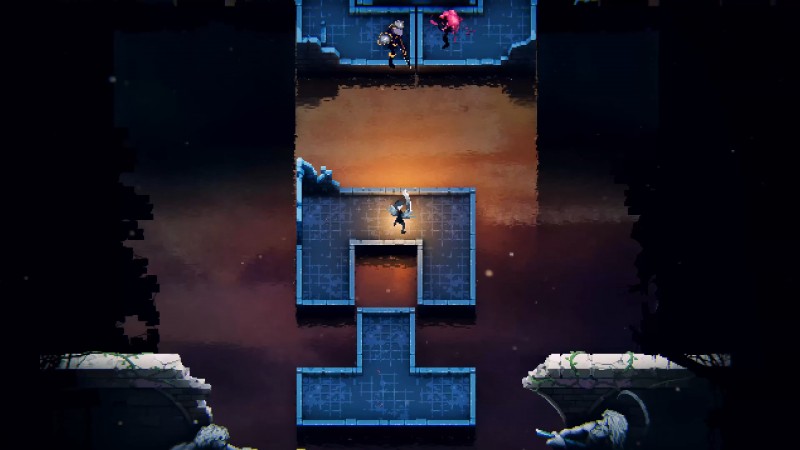 The procedurally generated, block-sliding labyrinths are never the same twice, and the designers also do a great job at ensuring that each level provides a unique challenge. Tiered platforms or traps that set fire to my raft add deeper, and sometimes urgent, layers to the traversal’s problem-solving design. I am often caught off-guard by enemies with unexpected abilities, like the insidious monsters that lock a platform in place until killed.

The unusual movement mechanic lends itself well to the combat. I often charge up an attack, pull up next to an enemy’s raft, and unleash a crushing blow before gliding away untouched or using a magic spell to go temporarily invisible. Besides this, parrying is my go-to strategy. Getting the timing right opens up my opponents to a devastating counterattack which makes me momentarily impervious. It’s incredible how powerful landing that perfect attack feels. 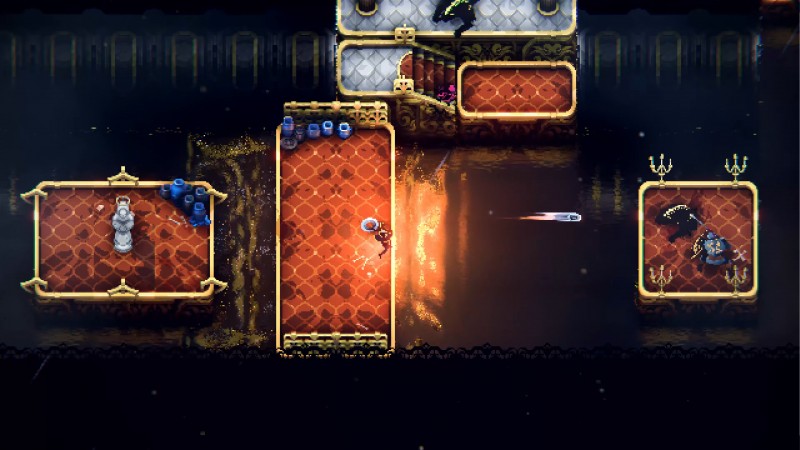 Loot River’s heart-pounding combat and traversal-by-puzzle design are built on a roguelike foundation. I fight my way through creative and distinctive areas until an adversary finally gets the better of me. Then the process starts all over at the first level, with most of my hard-won upgrades lost. Progression doesn’t work like a Souls game, and ditching that expectation early on helped me better enjoy the experience.

It is tempting to equate Knowledge, an in-game currency sometimes dropped by defeated opponents, to Souls from the game’s inspiration. But while I could spend the resource to permanently unlock better gear from specific vendors, I couldn’t use it to upgrade my stats. Leveling depends entirely on the number of enemies defeated in a run, and typically every stat drops back to starting levels upon death. Also, just because I unlocked a new weapon or armor option with my Knowledge didn’t mean I always had access to it. There are some ways to influence what kinds of gear I’d have at the beginning of a run, but getting hard-hitting weapons or stat-boosting accessories mostly came down to what loot monsters dropped or what I could find in chests. It can be a brutal and frustrating cycle, but it is also so satisfying to find a game-changing item early on or perfectly tailor my stats to that run’s needs. Even with this system’s hurdles, I always got sucked back into the fray. 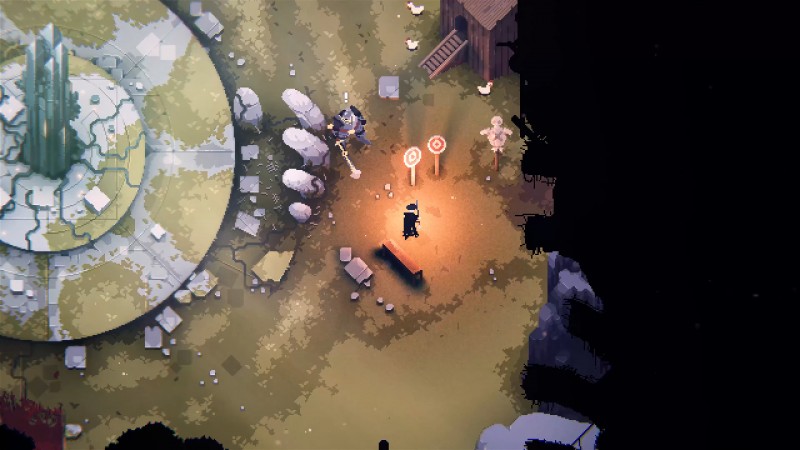 It’s not all doom and struggle, however. Successfully clearing a level or succumbing to an inevitable death brought me back to a tranquil hub called the Sanctuary. The bright environment boasts chirping birds, a healing monument, helpful NPCs, and pettable chickens (which I visited between every mission for good luck). My quest, undying state, and ability to shift the world under my feet are all linked to the relic in this peaceful zone’s center. While a little ambiguous, the narrative is thought-provoking. The characters bound to this miraculous and ominous object ask me to consider the price of its power, even as I happily take advantage of it to continue the looping gameplay.

It took me a little over six hours to get my first victory screen, but that wasn’t the end of the game. Unlocking everything, uncovering secrets, and piecing together the lore are all a part of the almost inexhaustible experience. It can be acutely irritating to fall victim to a first-level foe after nearly making it to the last boss in the previous run, but the game is hard to put down. Loot River reimagines some of its inspirations’ best elements, offering players a chance to sail cleverly through each environment, grow powerful enough to slice up once-impossible threats, and unravel a story that smartly weaves into its gameplay.