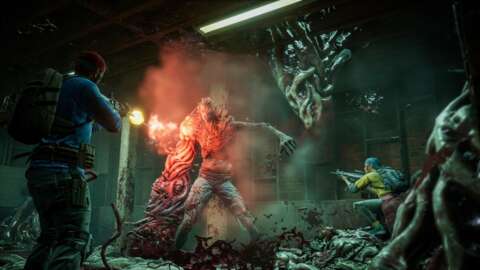 The greatest compliment one can pay to Weird West is that it does, by and large, capture the feeling of playing one of the pulpy EC Comics and Two-Fisted Tales that inspired so many supernatural Westerns in the past. From its beautiful two-color art style and creepy morality fables to its omnipresent leathery-sounding narrator, Weird West is a fully realized grungy dimestore cowboy fantasy brought to vivid life. The game you actually have to play to make progress in it isn’t as resounding a success, however.

Weird West wastes no time knocking you off-kilter. The second you hit the New Game option, you, an unnamed hooded figure, are strapped to a chair while other hooded figures brand your neck with an arcane symbol and shove you into the body of one Jane Bell, a former bounty hunter who’s hung up her spurs for the quiet life on a farm. Unfortunately, she’s forced to go full Unforgiven after a gang called the Stillwaters raids her farm, kills her child, and kidnaps her husband. As it turns out, they’ve been raiding towns and villages across the country looking for fresh meat to feed to their new Skinwalker leaders, and it’s up to Jane to put a stop to their reign of terror. That, by itself, is the kind of plot you could build an entire game out of, but Weird West is even more like its EC Comics forebears than it seems at first blush. It’s an anthology, so when Jane’s story has come to a close, we find ourselves back in a room with the hooded figures, putting the brand on someone new–a man whose memory and humanity are utterly mutilated out of him when his soul is brutally grafted with a pig-human hybrid body and a nearly unpronounceable name. And when you’re done playing through that tale, there are three more waiting for you.

The Weird West is a place with a memory, however, so someone you kill as Jane Bell is still a goner when the Pig Man shows up, though there’s a non-zero chance you see them later as a zombie, or a ghost with unfinished business. If Jane hasn’t yet captured a specific criminal when her story is over, that criminal will continue to operate until you–no matter whose body you inhabit–finally take the time to put them down. Choosing not to kill someone can have an impact as well–if you save someone’s life, they may show up later during a shootout to save you in return. On paper, that level of cause and effect sounds incredible, but Weird West is a few rounds shy of a loaded revolver. The game’s ability to remember grudges, deaths, and personal vendettas between characters is impressive, and actually getting to know this gigantic cast of innocents, bastards, and weirdos is a joy. However, the morality system by which many of the game’s decisions are made is far too binary to live up to the game’s complexity elsewhere.