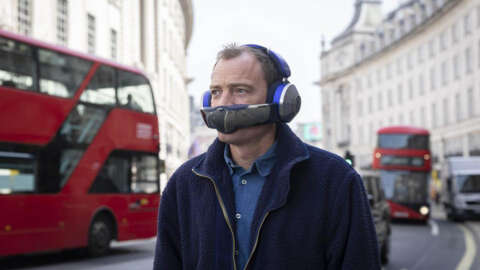 In what we have been assured is not an early April Fools joke Dyson has revealed its first ever wearable device: a set of air-purifying headphones. The Dyson Zone is a headset that distils the company’s existing air purification tech into a personal visor-like device, complete with noise-cancelling headphones.

While Covid is the first thing that comes to mind when it comes to air filtration in 2022, the Dyson Zone was originally concepted far before the virus was a concern, as a response to rising levels of pollution in major cities. The device’s announcement page shows the various stages of the Zone’s development, from a snorkel-like filtration device to the current design with a visor delivering a flow of filtered air to the nose and mouth.

The device is designed to be used both indoors and out to protect from “city pollution including gases, allergens, and particulate matter,” with active noise-cancelling headphones also adding protection from urban noise pollution. The visor is designed to sit near the face without contacting it, avoiding the issue of skin irritation that comes with face mask-style designs and enabling extended periods of wear.

While Dyson has a long history with air filtration technology, the Zone is the company’s first foray into audio devices, so it’ll be interesting to see how the headphones hold up. In its announcement, Dyson promises “advanced noise cancellation and pure, high-fidelity audio,” which it says has been engineered using a scientific approach.

The reaction to Dyson’s announcement has been mixed, with some users excited for the personal filtration device, while others have assumed that it must be an April Fools joke. The concept is reminiscent of Razor’s RGB face mask, which was announced around this time last year.

The Dyson Zone will be launching in Autumn 2022, with some regions getting the device earlier than others. So far, Dyson hasn’t released any more information about the device’s availability and price, but it promises that will be announced in the coming months.