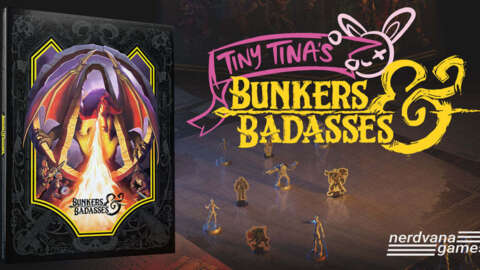 After it was first announced back in 2020, the real-life physical TTRPG of Bunkers and Badasses–the Borderlands universe’s equivalent of Dungeons and Dragons–is now available. The game, which was developed by Nerdvana games in collaboration with Gearbox, was shown off at the Gearbox Main Theater Show during PAX East over the weekend.

The game was unboxed at PAX East by none other than Gearbox CEO Randy Pitchford himself. Pitchford showed off the deluxe edition of the game, unboxing the various extra goodies including a BM screen, minis, enemy punch-outs, a playmat, character sheets, and a whole lot of dice.

While pre-orders for the game opened back in 2020, sourcebooks only just started shipping out this year. The pre-orders for most regions have already been shipped, though there are some hold-ups for those in Canada and Europe, according to Nerdvana’s latest update.

For players in the US, UK, Australia, Europe, and China looking to get into Tiny Tina’s favorite game, both deluxe editions and sourcebooks are now available to buy on demand from the Bunkers and Badasses website. The sourcebook alone will set you back $60, while the deluxe edition with all its bells and whistles costs $120.